In 1967, Scottsdale’s longtime Arabian horse breeder Ed Tweed embarked on a mission to race the horses he bred. He imported a chestnut Arabian stallion from Poland named Orzel, or “Eagle” in English, that flew past competitors to become the first U.S. National Racing Champion. Among other wins in halter and performance, Orzel was the victor in the debut of the U.S. National Championship Ladies’ Sidesaddle category, partnered with Tweed’s granddaughter Shelley Groom Trevor. Thousands of fans visited the legendary performer in retirement at Brusally Ranch. Decades after Orzel’s death, horses he sired continue his winning legacy. Author Tobi Lopez Taylor chronicles this triumphant story. 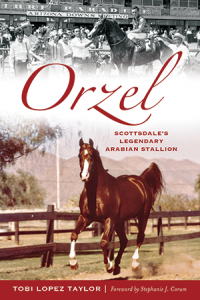 About the author: Tobi Lopez Taylor
Tobi is an award-winning writer and editor. Trained as an anthropologist, she has bachelor’s and master’s degrees from Arizona State University. She is the author or co-author of two previous books and her writing has been included in anthropologies, as well as in various national magazines, including American Indian Art Magazine, Archaeology Magazine, Blood-Horse, Dressage Today, and Horse Illustrated. Her first co-authored book won the Arizona Governor’s Award in Historic Preservation, and an article she wrote on Arizona Rillito Park Racetrack received a Sprint Award for excellence in equine journalism. She lives on a small ranch in southern Arizona, where she raises and rides Brusally Ranch-related Arabian horses, including descendants of Orzel.

Available for purchase on Amazon