Badgers, rabbits, and chickens. Oh, my.

Greetings from the farm.

I decided to add this On the Farm section to the blog because we all do other things in our lives in addition to traveling to horse shows, especially since the COVID-19 pandemic lockdown began through the United States in March 2020.

Here in southeastern Arizona, welcome summer in our usual hot weather fashion. June is our warmest month. The good news is – besides it being a dry heat – the high temps trigger monsoon (the rainy season) that keeps us wetter and greener with daily afternoon showers. These make the days varied as well as a tad bit cooler throughout the balance of the summer. 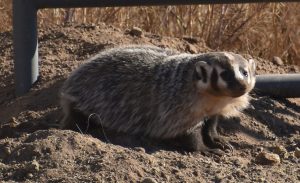 I don’t know from badgers, but during early morning chore rounds on June 2, I noticed dirt being chucked from an enormous hole at one of our paddock fence lines. My eye has caught gophers doing similar work but the amount of dirt being thrown up made me stop and stare. It wasn’t a moment later that I saw my first American badger in the wild. Sure, I’ve seen them before, but they’ve either been in a zoo or mounted in a museum. This was a busy, breathing badger. It didn’t pay me much mind, and I was caught between curious and petrified.

This husky, low-rider member of the weasel family is found throughout North America. They’re nocturnal carnivores that live a solitary lifestyle, except when making new badgers. And, according to my Google searches, they’re as ferocious as they are cute. Oh, great, and I’ve got one camped out in a horse paddock.

Living in rural Cochise County Arizona, I find the NextDoor.com app helpful for asking questions like, “A badger has moved in. Now what?” One neighbor suggested I contact the county’s only USDA Wildlife Specialist, Al, who happens to live in Bisbee, just 19 miles east from the farm. Al is a retired police officer who contracts with the State and has tons of knowledge about all manner of Arizona’s furry and feathered friends. I found he asked good questions, listened well, and gave me good answers or suggestions.

“Janet, what do you want to do?” was the most important. I wasn’t having any problem with the badger and I didn’t want one killed just because I might have an issue. It wasn’t like a rattlesnake had moved in and I knew by its inherent nature one of the animals or humans was going to be bitten. Al explained live trap relocation was off the table because badgers don’t relocate well. Basically, that means if the badger became a problem it would need to be euthanized (shot, basically).

Al and I decided to try a live-and-let-live approach. I’d give the badger a respectful distance around its den. I’d keep my curious poodles and geldings away from its area, and we’d see how it went. Al and my NextDoor neighbors said it could just as quickly move on to other gopher-abundant locations that were a bit quieter than a busy four-acre horse farm.

On the morning of June 3, there were two badgers! So much for a solitary life and, I’m thinking, these lovebirds aren’t moving on any time soon. My mothering instinct told me one of the two burrowing creatures is nesting.

Rabbit Hemorrhagic Disease Virus (RHDV) is a highly contagious, fatal disease that has caused the number of wild and domestic rabbits to suddenly die. I’ve heard it likened to the Ebola virus. RHDV has been a problem for the last few years, but it’s spreading, and wildlife experts are seeing an uptick in deaths. The link below is to a CBS Denver news video from June 19, 2020, explaining a bit more about this epidemic.

The onset and spread of RHDV mean fewer numbers of rabbits for prey animals like the coyote, wolves, snakes, bobcats, mountain lions, birds of prey, and badgers! So, what do wildlife prey animals turn to? Domestic coops and free-range fowl.

All seemed to be going well in our live-and-let-live world. As June blossomed, I was seeing less and less of the badgers. So much so that I’d wondered if they had moved on. No such luck.

Al called me on June 10 and stopped by. He asked me about the badgers and if I’d noticed anything amiss. Nope. Then, he said a nearby neighbor’s coop had been raided. When the neighbor came out to see what was upsetting her flock, she saw a badger and bravely struck it several times with a shovel! It had killed several of her hens.

Coming from a law enforcement mindset, Al set a live trap and trail cam to catch the criminal in the act. He doesn’t believe in, nor does the law allow him to kill wildlife indiscriminately because it may be the offending party.

Yesterday, while doing evening chores I came across a hen hiding at the bottom of a yucca plant.

Turns out this Plymouth Rock was one of three surviving hens of a flock of 22 in my next-door neighbor’s coop. I learned three badgers had conducted a daylight raid on Ben and Shannon’s coop hauling away 19 hens to who knows where. The ardent badgers burrowed under, up, and into their coop, and some of this was witnessed by Shannon. She desperately tried to grab chickens and fight off snarling badgers with the same objective.

Shannon and Ben have moved the surviving chickens to their garage. We are all on a badger watch. Soon, Al will come with live traps and a trail cam to monitor their chicken coop and my dens too. Sadly, this reminds me of a wildlife program illustrating what happens when wildlife finds a fast food alternative living in and amongst human neighborhoods.

Today, Al called to report that the neighbor to our north hadn’t had any more badger encounters, nothing was ensnared in his live trap, and no badger showed up on his trail cam. Al suggested we fill in our badger holes to learn if they had indeed moved on. Ian and I did that this evening after chores.